Vitamin A, retinol and beta carotene 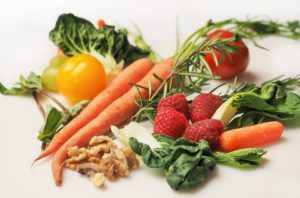 Retinol is the naturally occurring form of vitamin A, and it is founded mainly in animal product. Beta -carotene, also called “plant” vitamin A, is, in fact, a carotenoid, which is converted into vitamin A by our livers. Vitamin A stores in your body can be depleted by infection, so is a good idea to boost your intake during colds, flu and other viral and bacterial conditions. Retinol is metabolized better by your body if you take it with fat, oil, or protein in the same meal.

Beta carotene is found in all brightly coloured fruits and vegetables, and is generally believed to be safer than retinol, which is fat soluble.

Alpha carotene is found in carrots and pumpkin; lycopene is abundant in red fruits, such as watermelon, red grapefruit, guava and , in particular, cooked tomatoes. Lutein and zeaxanthin are plentiful in dark green vegetables, pumpkin an red peppers, and crytoxanthin is present in mangoes, oranges and peaches.

The primary benefit of carotenoids lies in their antioxidant effect- protecting the cells of the body from damage by unstable oxygen molecules called free radicals.

Carotenoids may guard against certain types of cancer, apparently by limiting the abnormal growth of cells. Lycopene, for instance, appears to inhibit the development of prostate cancer. Lycopene may also be effective against cancer off the stomach and digestive tract. Studies show that high intakes of alpha carotene, lutein and zeasanthin decrease the risk of lung cancer, and that crypoxbathib and alpha carotene lower the risk of cervical cancer.

There is a link between low levels of carotenoids and menstrual disorder.

Carotenoids are pigments that give plants their colour and beta carotene in particular is a good antioxidant which may help to slow down the ageing process and prevent cancer.

Take vitamin E and C with vitamin, A, since polyunsaturated fatty acids work against vitamin A unless there are antioxidants present

The body needs Zinc to utilise stored vitamin A

Retinol in very high dosses may causes headaches, some nausea, and liver problems. Pregnant women, ot those planning a pregnancy, should not take in excess of 7.500 iu per day because it can cause birth defects. They should also avoid eating animal livers.

In a major European study lycopene was shown to be effective in preventing heart attacks. Men who consumed large amounts of lycopene had only half the risk of a heart attack compared with men who took small amounts. the protective effect was most marked among non smokers.  All carotenoides, in special alpha carotene and lycopene, block the formation of LDL (‘bad’) cholesterol, which can lead to heart attacks and other cardiovascular problems.