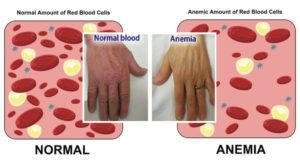 Anemia tends to come in two forms- pernicious anaemia and iron deficiency. If you gave pernicious anaemia , it is owning to  a lack of intrinsic factor needed to absorb vitamin B12, which is needed for the production of red blood cell in the body. A number of disorder can create B12 malabsorption, including gastritis, Crohn’s disease and coeliac disease. Smoking also inhibits absorption of iron. If you have been diagnosed as suffering from anemia the nromal procedure is to take a large amount of iron- but it is very important to make sure the co factors, which are vitamin B12, folic acid and vitamin C, are taken at the same time to optimize absorption. 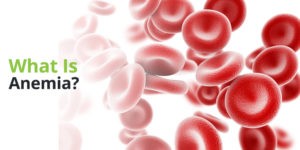 Anemia, the condition often associated with iron deficiency, was first recorded 3,500 years ago. Iron is a component of the red blood cells and the muscles, assisting in the transportation of oxygen throughout the body. Women lose twice as much iron as men, and are more likely to be deficient, particularly during child bearing years. Drinking coffee within an hour of a meal can reduce iron absorption by up to 80 %

Iron is an essential mineral nutrient. It is a component of hemoglobin in red blood cells and returns waste carbon dioxide from  the cells to the lungs. The myoglobin in red muscle tissues transports oxygen into the tissues for energy storage. Iron is also a component of certain metabolic enzymes. Iron in the body that is not used is stored in the spleen, bone marrow, and liver. Today, more than 500 million people around suffer from anemia. 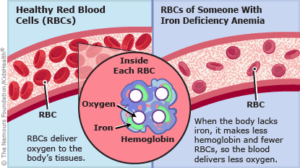 Iron absorption occurs in the proximal duodenum, with the amount of iron absorbed being dependent on the sufficiency of iron stores.

Special notes:Common illness in children and benefits of herbal medicine

Increased levels of iron may be required by infants, children , athletes or vegetarians.  Iron supplements can be prescribed by your physicians if necessary.  The best form is ferrous iron or organic iron, and they are available in a wide variety off doses – usually up to 300 mg .

Individuals suffering from iron overload not only experience cellular damage from adverse redox chemistry of free iron, but also are at enhanced risk of infection. Iron overload may result from mutations in iron metabolism genes, such as in hereditary hemochromatosis. Alternatively, iron overload may be secondary to refractory anemias or caused by chronic transfusions.

Iron supplement can interfere with antibiotics and other medication. Be sure to tell your doctor about any supplements

Avoid high doses supplements containing iron alone, unless they have been prescribed by your doctor. Some people suffer from hemochromatosis., an inherited disease which  causes them to absorb too much iron, and most don not even know they have it. Early symptoms include fatigue and aching joints.

A supplement containing iron alone could also mask a cause of anemia, such as bleeding ulcer, and prevent your doctor from making and early, life saving diagnosis.

Iron is best absorbed when taken on empty stomach. However, if iron upsets your stomach, have it with meals, preferably with a small amount of meat and a food or drink rich in vitamin C, such a broccoli to help boost the amount of iron your body absorb.

Good sources: liver, kidney, chicken, cocoa powder, beans, dark chocolate, shelfis, nuts, pulses, red meat, eggs yolks, molasses. Dark chocolate should only be eaten occasionally, but it does have the benefit of providing iron. Vegetarians can get adequate amounts of iron from beans and peas, tomatoes, spinach, leafy green vegetable, dried fruits, such as apricot, raisins and prunes, soak them  for a few minutes  in a warm water  to reduce the sugar content. Drain before serving. Brewers’s yeast, kelp and wheat bran are also good sources. Most breakfast cereals contain added iron.

Did you know?  If tomatoes or other acidic food are cooked in a cast iron pot, a healthy amount of iron leaches out of the cookware into the food.